The second session welcomed Peter Wilkes – Member of the Executive Board of Biesterfeld AG, Christian Kohlpaintner – CEO & Chairman of the Management Board of Brenntag SE, Andrew Byrne – Owner & CEO of Corcoran-Group, and Redzinaldas Mickus – Owner & CEO of UAB Greenlab Solutions. This group of CEOs talked about the conflict in Ukraine and its impact on sourcing/customers/high energy prices/Russia sanctions and how to respond.

The CEOs attempted an outlook on the second half of the year, and agreed on a general unease about the well-being of the global economy, and early signs of a fall in demand caused by lower consumer spending. However, they did not reach a consensus on the impact of this on the economy and chemicals sector for the coming months. Rising inflation was also on top of the agenda, as well as its impact on demand. Outstanding orders could potentially hold the chemicals sector over until the end of 2022, but the question remains what next year will bring. Despite this year having the potential to be a strong year for the chemical sector because of 2021 incentives, the signs are there for a possible recession or downturn come 2023.

On the topic of imports, the panel raised concerns on Europe's position as a net importer and its dependency on China, and highlighted the need to restock materials again to avoid shortages due to fraught supply chains. China's zero-COVID-19 strategy remains a risk for supply chain disruptions.

Is Europe losing its competitive edge because of its lack of access to cheap oil and gas from Russia? With costs rising, and Europe losing its access to cheap Russian oil and gas, chemical production in Europe is becoming increasingly more expensive. In the future, we will see more import of lower cost production products. We are suffering from high natural gas costs, high electricity prices and high oil costs. Previously, high costs have been passed on in the value chain, but concerns rise that it will not be possible anymore to do this. Competitiveness of the European chemical industry is thus under a lot of pressure.

Positive attitudes towards the situation in Ukraine were shared among the CEOs. Businesses is increasingly returning to Ukraine though reconstruction. Ukrainian business collapsed entirely in March, but found its bearing again come April. In May, business went back up to about 60% of the pre-war rate. We're a long way from home, but in terms of chemicals distribution it seems to be improving.

Regarding the impact of sanctions on Russia, the panel was less impressed. The Russian businesses are readjusting rapidly, and impacts of sanctions on their economy in general will be short lived. They warned that other players are supplying goods and services in the Russian market. They do stand by the fact that something was needed to make a point (i.e., shut down operations in Russia), however, businesses are realigning. 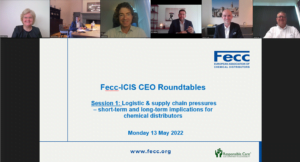 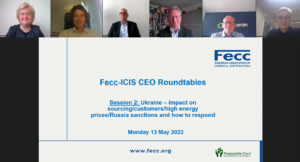